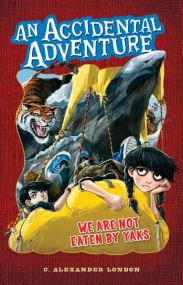 We Are Not Eaten by Yaks

“Have you ever been thrown out of an airplane and fallen over a waterfall and been chased by angry warriors and poisoned by witches and rescued by weirdo guides disguised as little monk children?” exclaims Celia after returning from one of many family adventures. In the first installment of this new middle grade series, twins Celia and Oliver Navel find themselves facing one adventure after another as they help their explorer parents search for the Lost Tablets of Alexandria.

Celia and Oliver would rather spend their time watching TV shows such as Ten Ton Taco and Love at 30,000 Feet, but, much to their dismay, their lives are less about watching action and more about living it.   Even now, though their mother has been missing for years, their father continues his globe-trekking, adventuring and exploring ways – dragging his children with him whenever he can.  (To discover what happened to Claire Navel, kids will have to dare to read.)

With all the elements of classic adventures – deceit, treachery and trickery, missing parents in need of rescuing, sibling differences, and unusual problem-solving (aided by their favorite TV shows), readers will delight in this clever page-turning action- packed (and hilariously silly) tale where you are never sure what to expect or the identity of the latest villain turned Lama.

Adventurous readers will definitely want to follow Celia and Oliver in their forthcoming adventure in the Amazon in An Accidental Adventure: We Dine with Cannibals (November 2011).

C. Alexander London has a double life, much like the characters in his new series.  In his first writing life, he traveled the world and told real stories about people and their experiences.

During one of his trips, he realized that he was a reluctant adventurer who enjoyed a more mundane lifestyle, and that led to his writing stories about Celia and Oliver’s accidental adventures.