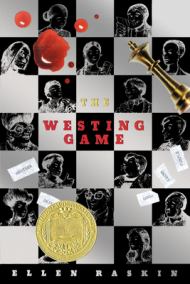 Sixteen confused people with little in common arrive at Sunset Towers, a sleek apartment building overlooking Lake Michigan in fictional Westingtown, WI. They are here because the will of paper magnate Sam Westing is about to be read. The group is diverse in the extreme: their professions include doctor, judge, deliveryman, seamstress, secretary, doorman, and restaurant proprietor. They are WASP, Jewish, African-American, Chinese-American, Polish-American, Chinese, and Greek.  And one of them killed Sam Westing.

The will stipulates that the first of the sixteen to figure out who killed Westing will become the sole heir of Westing’s $200,000,000 estate. In what follows, author Ellen Raskin achieves a remarkable balance among her diverse cast of characters—1978'sThe Westing Gameis compelling as a mystery, but the complex web of relationships and motivations that develops between her sixteen protagonists is fascinating in its own right. Even the superficially most repellent characters evoke a degree of sympathy, and taken as a whole this multicultural group feels like a scrappily competitive but ultimately hopeful microcosm of America.

Of all of these characters who find sleuthdom forced upon them so suddenly, thirteen year-old Tabitha Ruth “Turtle” Wexler ultimately emerges as their resident Sherlock. Yet unlike fellow kid-detectives Nancy Drew, Encyclopedia Brown, or even Holmes himself, Turtle has her own problems to overcome in addition to the Westing mystery: By age 13, she is known already for enjoying her reputation as a nogoodnik. In order to solve this case, Turtle must discover resources in herself that she had not previously known existed; the fact that Turtle’s struggle is to grow as a person as well as a detective only makes her more relatable as a hero, for kid readers and adults alike.