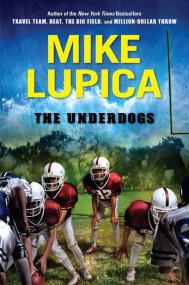 Touchdown!!!  From the title and vivid cover readers may guess that this is a book about a determined team of middle school football players struggling to beat odds stacked high against them.  Of course, you’re right, there is lots of realistic football-talk (no surprise from masterful sports writer Mike Lupica), play-by-play action and team spirit that will have kids bursting with pride. But there’s a lot more to this story as well.

The Bulldogs are not the only underdogs in this novel. Their hometown, Forbes, faces a serious recession when the Forbes Fliers sneaker factory closes under the pressure of bigger companies.  Will Tyler, captain of the Bulldogs, faces his own challenges at home when his father, former Flier employee and former football star gets more and more discouraged every day, especially when he hears that budget cuts are going to prevent Will from playing football that season.  But when Will sends a letter to the head of New Balance and miraculously gets him to sponsor the team; convinces his dad to be their coach; persuades every person in Forbes with any football potential (including one very surprising member) to join the Bulldogs, and digs deep to push himself to play harder than he ever imagined possible, everything starts to turn around.  The Bulldogs prove to be the glimmer of hope for a town that has lost so much.

The Underdogs is a great read for any kiddo who knows what it’s like to feel passionate about a sport, and for everyone who has been part of a team or ever felt like an underdog.  It will have readers cheering at the moments of victory, sympathizing with the Bulldogs in their setbacks, and taking pride in their heart and their determination to win.