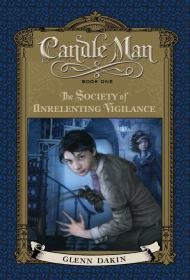 The Society of Unrelenting Vigilance

Theo Saint, suffering from a dangerous illness, is only allowed out of his locked bedroom in Kensington Gore--one of London's wealthiest quarters--once a year, on his birthday. The Three are the only people he has ever known: his guardian, Dr. Saint, his butler, Mr. Nicely, and his deaf nurse Clarice. This year he and Mr. Nicely visit the graveyard in the back of Dr. Saint's estate and Mr. Nicely, ever so nice, decides that they should turn in early. But before leaving, Theo spies a black package with a golden bow resting on a headstone. He surreptitiously takes it and discovers that his name is written on it in silver cursive.

That night, while Dr. Saint is away at a Society of Good Works meeting, burglars break into Theo's room carrying a strange metal object. Theo asks if the object is for him. "It will be for you, if you give us any lip!" the robber replies. Just in time, Theo remembers one of the books he's been allowed to read--the Guide to Good Manners. "I'm very sorry," he says quietly. "I don't believe we have been introduced." The robbers push him into a secret room of Dr. Saint's, where Theo is stunned to find a portrait of Lord Wickland, a member of the nobility who happens to look just like Theo.

There are also stacks of hundred year old newspapers warning of a villain named the Dodo. Then one of the robbers tries to grab him and Theo learns more about his condition: the man melts into a hideous puddle of wax.

The mysterious birthday present from the graveyard turns out to be a snow globe with a hidden note. The note tells Theo to go outside and he does, only to be whisked away by the Society of Good Works' arch-enemies, the Society of Unrelenting Vigilance. Theo must grow up fast in the next few days as a network of opposing forces fight to capture him and he discovers more and more about the full potential of his weird melting powers.

The first in a trilogy of Candle Man escapades, The Society of Unrelenting Vigilance introduces a gruesome cast of characters, including garghouls, smoglodytes, and the rancid Dodo. The course is set for a new type of superhero to pave his way (with wax!). Tongue-in-cheek humor is interwoven through every page, and thrilling cliffhangers close each chapter. Kids and adults alike will be rooting for Theo and whichever allies he can trust at that moment.