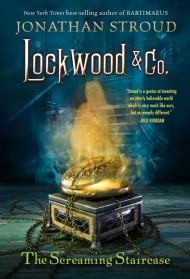 Most people run when they see a ghost. Not young Lucy – at least, not usually. Armed with salt bombs, iron chains, and magnesium flares, Lucy’s job is to find the ghost’s Source and contain it. But things rarely go smoothly.

You see, England has a Problem. There’s been an outbreak of supernatural phenomena, otherwise called ghosts or Visitors. Some are weak Type Ones. More disruptive and malicious are Type Twos, especially if they Cluster. Thankfully no one has come across Type Threes -- yet. Lucy and her colleagues Lockwood and George have a string of spectacular, heart-pounding adventures and disasters behind them. It seems as though everyone wants them dead: the ghosts, of course, who resist being put to rest, but especially Mr. Fairfax. He hires the youth for their most dangerous job ever, sending them on a ghost hunt in Comb Carey Hall, renowned to house a host of the most violent specters in England. And he sets impossible conditions, taking away almost all of their weapons of defense. If they weren’t desperate for cash and publicity, Lockwood & Co. would have said no.

Lucy recounts the escapade with a mix of pure terror and cheeky bravado. Readers will find their pulses pounding as the horror unfolds in riveting detail: the temperature drops; wicked voices whisper; a room fills with blood; and a staircase, the scene of a massacre, resonates with screams so loud they can shatter an ear drum. Even if the threesome can uncover and contain the Source of the haunting, will they be able to discover Mr. Fairfax’s motives for essentially trying to kill them before it is too late? This suspenseful, creepy thriller is only alleviated by the hilarious repartee between the three. That they work independent of adult supervision, plumbing the depths of the human heart and solving the mysteries behind the ghosts’ deaths adds to the appeal. When Lockwood & Co take on their next assignment – and there will be more – readers will want to be by their side.