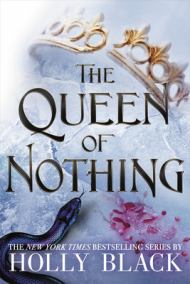 The Queen of Nothing

THE QUEEN OF NOTHING is the epic conclusion of The Folk of the Air series by Holly Black. It continues shortly after THE WICKED KING, with Jude banished to the mortal world. She trusted Cardan, but he tricked her out of Faerie. Now, Jude is a queen banished from her own land who makes money as a fairy bounty hunter, among other things.

Jude’s drive and ambition return when her twin sister, Taryn, visits her in the mortal realm. Taryn has (surprisingly) murdered her husband, Locke, and needs Jude to pretend to be her so she won’t confess. Jude still has the power from THE CRUEL PRINCE that makes her immune to fairy glamours. Jude accepts this mission and soon finds herself back in Faerie, face-to-face with the husband who banished her: the wicked High King of Faerie, Cardan.

The world and politics of Faerie are expanded upon greatly in this final book. Holly Black does a great job bringing plot threads from the previous books into this one without making anything too confusing. There’s just enough explanation to remind readers of the events and characters without anything being too redundant.

Cardan and Jude’s relationship is what makes this series so compulsively readable. It’s amazing how much two people can hate and love each other so much. Fans of Cardan and Jude are going to be extremely satisfied with the tension and romance that is built up throughout this book. The secondary characters in THE QUEEN OF NOTHING also shine. Taryn, The Court of Shadows, Oriana, Oak, Vivi, Heather, Nicasia, and even Madoc are developed thoughtfully. Readers will be invested in every character and either root for them to win, or wait patiently for them to fail. Only good writing can make you care about characters that much.

Finally, because this is Holly Black and The Folk of the Air, the story is filled with plot twists. There is one particular plot twist about two-thirds of the way through that is so wild and unpredictable that readers are sure to let out a jaw-dropping gasp. No one does plot twists and dramatic reveals like Holly Black, and she crowns herself as the queen in this royal fantasy book. The Folk of the Air is such a magnificent and special fantasy series, and readers will be happy to know that it ends satisfyingly. If you’re reading this review, you’re already a fan of the series, so what are you waiting for? Read THE QUEEN OF NOTHING as soon as you can!

*”Whether you came for the lore or the love, perfection.”―Kirkus, starred review

*”A compelling final piece in a powerful set.”―Booklist, starred review

“We’re being promised a ‘jaw-dropping’ finale…Based on the ride she’s taken readers on so far, we’d expect nothing less.”―Entertainment Weekly