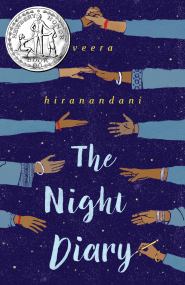 Many people rememeber Mahatma Gandhi largely because of his nonviolent, antiwar activism. However, what many people don’t recall is the political upheaval that begin in 1947, when the British granted independence to India and the country was partitioned. The country of Pakistan was created for Muslims while India was designated for Hindus and other religions. This decision led to a mass migration in which 14 million people crossed borders and over one million people died from the violence occurring.

“The Night Diary” is the story of one family, told by Nisha-a twelve year old girl, who lived through this tumultuous time.   Nisha’s mother, a Muslim, died when Nisha and her twin brother were born. The family is Hindu, while family cook and Nisha’s closest friend, is Muslim. Their neighborhood and school are a mix of religions working and playing together.

Partition changes everything in ways that are incomprehensible to Nisha.  Why have former friends become enemies?  Why does her family have to move?  Why can’t their cook come with them?  Her family leaves almost everything behind as they set out on foot, with the goal of walking ten miles per day.

Their journey is harrowing, both in perils they experience and violence they witness. There is also unexpected kindness.  And always the question, why? Why does everything have to change just because there is a new line drawn on a map.

In the “Author’s  Note,” Hiranandani explains that this novel is loosely based on the journey her grandfather made  from Mirpur Khas to Jodhpur with his parents and siblings. Just like Nisha’s family, they had to start over again in a new place as refugees.  The author’s connection to this history makes the book even more compelling.

Although “The Night Diary” takes place seven decades ago, the issues of religious intolerance and refugees are strikingly contemporary. And the issues of a child searching for love, acceptance, meaning and identity are timeless.