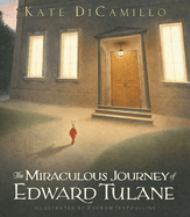 The Miraculous Journey of Edward Tulane

In a house on Egypt Street lives a china rabbit named Edward Tulane, doted over by his girl, ten-year-old Abilene Tulane. Every day she dresses the rabbit in one of his fine silk suits and winds his gold pocket watch. "I love you Edward," Abilene says to Edward each night before bed. Edward does not respond, first because he can't speak or move, being a china rabbit, but also because Edward's love is reserved for himself. He never ceases to be amazed at his own elegance. Edward was given to Abilene by her grandmother, Pelligrina, and the old woman is on to him. She tells Abilene a story about a princess who loves no one and comes to a bad end, and she whispers into Edward's fur-covered ear, "You disappoint me."

Edward's journey begins on board theQueen Mary, when the Tulane family sets sail for London. Two young brothers grab him off the deck chair, rip his clothes from him and toss him back and forth. Edward goes overboard. Can a china rabbit drown? Landing at the bottom of the Atlantic Ocean, he experiences his "first genuine and true emotion. Edward Tulane was afraid." In the years to come, he will be rescued by a fisherman, thrown into the garbage, taken in by a hobo and his dog, hung up in a garden as a scarecrow, saved by a boy whose little sister is gravely ill, and brought to a toy store.

The exquisite full-page color acrylic gouache plates, one per chapter, and the smaller halftone, sepia-colored watercolors give the book a Depression era feel. Electronic book readers may be convenient to use, but they won't convey the joy and personal connection children feel when they pick up this to-be-treasured example of fine bookmaking. Mind you, the book, winner of the Boston Globe-Horn Book Award for fiction, experienced somewhat of a backlash when it came out. Some of us loved it instantly and found it to be a transformative story about the power of love. Others found it manipulative, dark, and overly melodramatic, with a rabbit tortured by his extreme experiences. In which camp will you and your children find yourself? Look at the comments on Amazon to see the startling range of opinions. Whatever you do, make sure you finish the whole book before you judge it.

The story is an instant classic and a read-aloud with everything that readers love-lyrical writing that never condescends; a haughty rabbit who learns his lesson the hard way, through much tragedy and trial; and, finally, a satisfyingly twisty ending that brings the reader full circle (and made me tear up more than a dozen times). Edward's transformation does not come easily. He is humiliated, humbled, weary, and overwhelmed; he gives in to despair, but in the end, he gets his heart working.

Camillo seems to be saying to readers, "Get back on the bike. You can do it. Never give up. Life isn't easy, but it's worth it." For some readers, this might be the first book that makes them cry and experience an emotional connection. They won't like Edward at first, but they will want to read his story more than once. As a family read, it will give you and your kids much to contemplate. For instance, Edward leaves behind so many sad souls who have come to depend on him. It's interesting to consider the impact he has on their lives. What might have happened to them after he moved on? If your favorite toy could think, how might it describe itself? How has it changed your life? For far more ideas, see Judy Freeman's teacher's guide online at www.edwardtulane.com. The site also includes a Reader's Theater script of a climactic chapter in the book and a behind-the-scenes video with the author and illustrator.