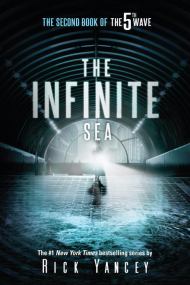 THE INFINITE SEA picks up directly where THE 5TH WAVE left off. Cassie, Ben, Sammy, Ringer, Dumbo, and Poundcake have escaped the enemy and find themselves in an abandoned hotel. Ben is wounded, and starts to develop an infection. Ringer leaves the hotel to explore the surrounding area and potentially find help, but ends up getting lost along the way. The heroes are still not sure when the fifth wave will hit or what it is and they are still not certain of who their enemy is. Things are grim, and they only get darker as the book continues.

The book is still narrated in multiple perspectives, and the biggest new addition is of Ringer. She gets a lot of narration time during the course of this book and provides another compelling female perspective bringing the story forward. One of the best parts of multiple-perspective stories is that each character learns different pieces of information, but they’re all missing pieces of the puzzle until they come together. The reader is able to see where the story is going while the characters remain in the dark. The natural mystery and intrigue in this series is heightened by this narrative choice.

Since Evan was separated from the rest of the gang at the end of book one, his point of view explores a different setting in the story. Part of it is the introduction of Grace—a new villain—who has a complicated history with Evan, a bizarre fascination with Cassie, and an obvious connection to the aliens who are trying to destroy the human race. This plot point is also successful in pushing the romance plot in this book forward. The love triangle involving Cassie, Evan, and Ben is still present, but it becomes clearer who Cassie may choose as the series goes on.

Perhaps one of the best things about this thrilling sequel is how deceitful it is to the reader. There is a lot of backstory and world-building that will make readers think they know what is happening. However, with new twists every chapter, the book dismantles readers’ perceptions, creating an experience where readers actually never know what is true about the world despite how confident they are of their understanding. In short, there are plot-twists galore.

THE INFINITE SEA proves that this is still a dystopian series that lives up to classics like THE HUNGER GAMES. It’s just as exciting and thought-provoking as the first book and is a must-read for any culturally literate teen.