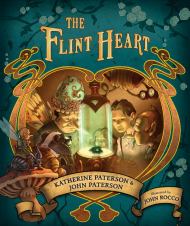 When Katherine Paterson, the United States Ambassador for Children’s Books, and her husband John Paterson saw The Flint Heart on a list of author’s picks from the 20th century that should still be read in the new millennium, they were intrigued.  When they read Eden Phillpott’s original story (1910), they were hooked.  The Patersons were determined to translate it into something relevant for a modern reader while maintaining the charm and wit of the original tale.  Mission accomplished!

As with any good fantasy fairytale, The Flint Heart begins many thousands of years ago. Local wise man, Fum, against his better judgment, creates a dangerous talisman, the flint heart, for the power-hungry warrior Putt.  Putt replaces his ‘soft’ heart with the heart as hard and cold as flint, trading in all his friends and favor for vast power. With this power he rules over his fear-riddled subjects for many years and is quite content, despite being hated by all.

When Putt dies, the flint heart and its terrible powers are buried with him.   There it lays for thousands of years, until it reemerges and falls into the hands of an unsuspecting farmer.  When the kindly farmer suddenly becomes irrational and hard-hearted, two of his children, Charles and Unity, seek advice from the fairies.  They are lucky enough to be invited to a grand dinner with “the wisest creature in the universe,” the Zagabob.  He guides them along in their journey to rid their father (and the various other creatures who come in contact with it) of the flint heart.

This is a delightful story, with a wry sense of humor, a little quirkiness, and a wonderfully imaginative cast of characters reminiscent of the types I could imagine Alice meeting in Wonderland.  In their telling, the Patersons occasionally address the reader directly, which makes the story all the more engaging.  John Rocco’s illustrations complete the mission to bring this tale up-to-date and will help to hold your kiddo’s attention and captivate their imagination.  This is a great book for parents to read aloud, or for kiddos to enjoy reading to themselves.