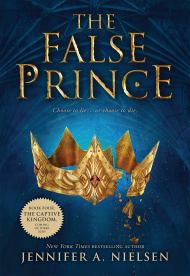 Years ago, a rebellious prince named Jaron was sent away in exile from the castle; only his ship was attacked by pirates, and all aboard were presumed dead. Now the country of Carthya is on the brink of civil war. The royal family has been murdered and political tensions run high as the nobles prepare to select a new ruler.

But rather than throw us into the midst of court intrigue right away, THE FALSE PRINCE begins with an orphan. When we first meet Sage, he is on the run with a stolen roast, a mischievous deed for which he is soon caught. He receives a painful beating, but is rescued by a nobleman named Bevin Conner, who has just purchased Sage from Mrs. Turbledy’s “Orphanage for Disadvantaged Boys.”

Defiant as ever from his years on the streets, Sage questions Conner’s intentions. What would a nobleman want with an orphan boy?

As Sage soon discovers, Conner is sweeping the countryside, secretly going from orphanage to orphanage, looking for a group of boys with close resemblance to the old Prince Jaron. Because the prince’s body was never found, Conner plans to convince the court of nobles that he has found Prince Jaron, alive and well and ready to reclaim the throne. Only the person taking the throne would not be the real prince, but an imposter, one of the orphans selected by Conner to be a false prince, a pawn and puppet with sworn allegiance to Conner alone.

Four boys – including Sage -- compete in this treacherous plot, and each bears a strong resemblance to the missing prince. But this is no one’s game, as each of the boys possesses different strengths and weaknesses that could make or break his bid for the throne. One boy, the sickly Latamer, is murdered outright for expressing a desire to leave; there’s Tobias, the educated one of the bunch who can both read and write; and then Roden, the superior swordsman and athlete. Each must prove within two week’s time that he has what it takes to be Conner’s prince. The stakes are high, as only the boy chosen by Conner will be allowed to live.

The novel is perfectly paced with plenty of action and tension, as Sage must constantly watch his back while training to become Conner’s chosen prince. Amongst all this treachery is a struggle for friendship as Sage forms bonds with his fellow contenders. He also develops relationships with the servants of Conner’s house, including a trainer, Mott, and a mute serving girl, Imogen. Even the minor characters in this world are fully drawn and rounded, creating a memorable cast of complex and rich characters.

But as any high stakes game of deceit might suggest, all is not as it seems. Amid layers of deception and manipulation, readers should be ready for surprises and plot twists as the clever Sage draws closer to the goal. A page-turner of the highest order, readers who enjoy strong characters, complex plots, and adventure stories should not pass this by.

THE FALSE PRINCE stands well alone with a satisfying conclusion, though it is the first part of Nielsen’s planned Ascendance trilogy. The next book, THE RUNAWAY KING, is expected in March 2013.