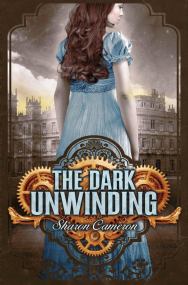 The Dark Unwinding will wind readers up in deliciously complicated knots.  Nothing is quite as it seems … until all is explained at the end with total satisfaction.  This “dark and stormy night” sort of gothic tale is made even more captivating with its totally original premise.

Katherine Tulman’s wicked, money-grubbing aunt sends her to inspect her uncle’s estate and have him officially declared a lunatic.  Katherine’s aunt stands to gain a substantial inheritance once Uncle Tulman is tucked safely away in an asylum.  Unless her aunt acquires this inheritance, Katherine’s future is grim.

The more Katherine learns about her uncle and his estate, the more she respects the man and his enterprise.  Her uncle is eccentric to be sure. (In today’s world he would probably be somewhere on the autism spectrum.)   Although he is child-like and requires care for everyday functioning, he is definitely not a lunatic.   He is an inventor with enormous creativity and genius.

Uncle Tulman’s estate employ’s 900 people that he has rescued from workhouses.

Ingenuity is everywhere in the set-up and maintenance of the huge property.  If Katherine reports that her uncle is insane, all this will be closed down.

Forces unknown to Katherine are confusing and confounding her.  She has to tie herself to her bed at night so that she won’t wander the estate and do strange things that make her seem crazy.  Allies and enemies, enemies and allies are impossible to distinguish as Katherine gradually pieces together the situation.

The plot thickens and twists.  A drug is employed to nefarious effect.  A flood engulfs a large part of the estate.  Against all odds, good (Katherine and her uncle) triumphs over evil (the monstrous aunt).

What makes this story outstanding is the heart and soul of the heroine, as well as the people who appreciate and care for her uncle.  The added bonus is the background of Great Britain during the reign of Queen Victoria, the place of eccentrics, and a glimpse of the laws governing inheritance in that era.