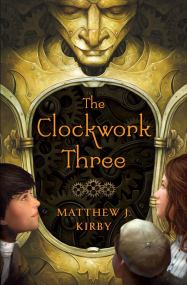 If your kiddo has ever felt the pressure of overwhelming responsibility, a sense of being alone in an endeavor, or even just the strain of trying to make a few bucks, he or she will easily relate to the characters in this book.  Add a touch of romance (not too much), a lot of adventure and a bit of magic and you’ve got The Clockwork Three.

The stories of Giuseppe, Hannah, and Frederick are interwoven with one common theme.  All three are struggling to catch the break they need to escape their crushingly-bleak futures. Giuseppe is a street performer enslaved by his Padrone to whom he must give all his earnings every night.  Hannah has been forced to give up her education and go to work at an upscale hotel to support her family when her father took ill.  Fredrick was rescued from an abusive orphanage by a clockmaker to be his apprentice.  As if things weren’t tough enough, each child must face increasingly dire circumstances along their journey.

But all three of these characters also share a glimmer of hope.  Giuseppe finds a green violin that stops listeners in their tracks (and seems to help them open their wallets more generously). Fredrick is working on an automaton, determined to bring it to life in order to break free of his apprenticeship. And Hannah has overheard hotel staff and guests talking about a treasure in a nearby park that she is now searching for.

Readers will cheer with each victory and empathize with every set-back, but regardless of where the characters are along their paths, your kiddo will be sucked into their stories.

I enjoyed this book at first reading, but when I found out Giuseppe’s story is actually based on a real boy named Joseph who had a court case against his Padrone, I was hooked even more.  The Clockwork Three is terrific story-telling, relatable characters, and a bonus of historical fiction.  A great read that kids will eagerly immerse themselves in.