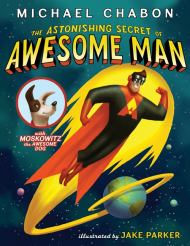 Readers: Brace yourselves to meet Awesome Man. This young superhero is totally dedicated to vanquishing crime. His mission keeps him utterly absorbed 24/7, except for brief respites to eat and sleep. His nonstop, fantastic fantasy adventures will keep readers laughing out loud

Professor Von Evil, Sister Sinister, the Red Shark, and the Flaming Eyeball don't stand a chance when Awesome Man decides to kick a little bad-guy behind. His trademark Awesome Power Grip can stop a runaway freight train, and hug Jell-o, and also hug mutant talking Jell-o from Beyond the Stars. Even extra gross antimatter slime slides down in defeat to Awesome Man's awesome powers.

Did we mention that Awesome Man is awesome?

Being Awesome Man is not just nonstop fun and photons. No indeed! When Awesome Man gets angry, really angry, he could accidentally turn over a milk truck or knock down an innocent building. Being super strong means he has to be super careful.

In tense times, he heads back to the Fortress of Awesome to calm down, rest, and restore his energy with a new supply of positrons, brought straight from the kitchen in a thermovulcanized protein-delivery orb.

At the end of another busy day overcoming evil, Awesome Man transforms into his secret identity of a regular human boy. When he gives his secret-identity mom a power grip hug, she holds him tight and tells him the hug feels awesome.

TEACHER TIPS:Children will identify with Awesome Man and will want to fantasize about their own super powers. Imaginations will soar supersonically as kids choose the super powers they'd most like to possess. Individually or collectively, base a picture book on their ideas. Encourage invented vocabulary like "thermovulcanized." Writing will "take off!"