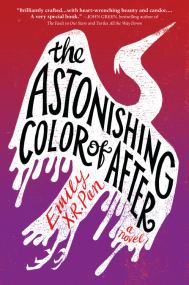 The Astonishing Color of After

Leigh Chen Sanders knows her mother is a bird. She’s seen her, a majestic red bird with a huge wingspan, on the doorstep late at night. In the long, quiet aftermath of her mother’s suicide, Leigh craves her presence. Then one night, the bird delivers a box full of artifacts from her mother’s past. And the bird wants her to take these artifacts to her grandparents in Taiwan, grandparents from whom her mother had been estranged for decades. Leigh has never met them, but now she must, if she wants to see the bird again. And she does, desperately.

In THE ASTONISHING COLOR OF AFTER, a New York Timesbestseller and Indie Next List Pick, debut author Emily X. R. Pan unspools family secrets and the complexities of grief with lush imagery (both realistic and otherworldly) and character-driven storytelling.

The narrative jumps between Leigh’s visit with her grandparents and her memories of the last few years at home. Her daily life has ricocheted between a sweet will-they-won’t-they crush on her best friend, Axel, and coping with the effects of her mother’s worsening depression.

Pan’s treatment of suicide is honest, respectful, and complex. Leigh’s mother’s death is portrayed as a terrible effect of a mental illness. Yes, she endured struggles and disappointments in her life, but her depression is a disease independent of tangible stressors. Leigh and her father do everything they can for her, but their own fear sometimes prevents them from understanding the full severity of her condition. Leigh’s cycles of anxiety, frustration, detachment, guilt, and ultimately grief are thoughtfully rendered.

Axel is a loyal friend who has watched Leigh’s mother decline alongside her. The two of them help each other process both the good and the bad by asking “what color” they’re feeling. They’re both artists, and creativity is their coping mechanism. Their connection feels real and earned, and readers will hold their breath as the two get closer. But the afternoon Leigh and Axel finally share their first, fumbling kiss is the same afternoon Leigh’s mother takes her own life. When Leigh flies to Taiwan, she leaves her relationship with Axel unresolved.

While in Taiwan, Leigh witnesses vignettes from her mother’s and grandmother’s pasts with the help of mystical incense left by the bird. Pan gives her own grandmother’s story to Leigh’s grandmother: she was sold to another family to be raised as their son’s future wife, but she made her way back to her family of origin and married for love instead. In experiencing these family secrets firsthand, Leigh begins to understand her place within a complicated family.

The experience of reading the novel is sensory and immediate. Pan’s descriptions of the night market in Taiwan are full of specific smells and sights and sounds. Even Leigh’s fleeting visions of the numinous plane between life and death are vivid and transfixing.

THE ASTONISHING COLOR OF AFTER is a must-read for fans of magical realism and messy family stories.

“Emily X.R. Pan’s brilliantly crafted, harrowing first novel portrays the vast spectrum of love and grief with heart-wrenching beauty and candor. This is a very special book.”―John Green, bestselling author of The Fault in Our Stars and Turtles All the Way Down

“Magic and mourning, love and loss, secrets kept and secrets revealed all illuminate Emily X.R. Pan’s inventive and heart-wrenching debut.”―Gayle Forman, bestselling author of If I Stay and I Was Here

“Emily X.R. Pan utterly transported me to a world reminiscent of Isabel Allende. Haunting at every turn, this is a glorious debut.”― Renée Ahdieh, bestselling author of The Wrath and the Dawn

“This beautiful, magical journey through grief made my heart take flight.”― Holly Black, bestselling author of The Cruel Prince and The Darkest Part of the Forest

“In this dazzling debut, author Emily X.R. Pan has created a spellbinding narrative about love, family, and what it means to grieve.”―Bustle

“Pan’s emotionally charged debut is a compelling exploration of grief and the insidiousness of depression.”―Publishers Weekly, starred review

The Beauty That Remains By Ashley Woodfolk

The Midnights By Sarah Nicole Smetana

And She Was By Jessica Verdi