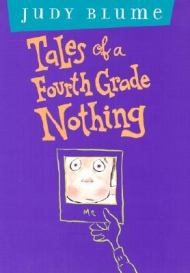 Peter Hatcher has an almost-three-year-old brother named Fudge, who not only receives all their parents' attention, but gets away with everything. The only time Peter likes him is when Fudge is sleeping, sucking his thumb and making a slurping sound. Peter walks home to his family's apartment on New York City's West 68th Street from a birthday party with a special prize: he's won a real live baby turtle, and he's already named it Dribble.  "I don't like the way he smells," his mother says when he brings him home.

One night Mr. Hatcher, who works in advertising, invited his client, president of the Juicy-O juice company, and his wife over for dinner. The Yarbys bring Peter and Fudge presents: Peter gets a picture dictionary six years too young for him that he already has. But, to be polite, he doesn't mention this and thanks them for the gift.

All is going well, until Fudge emerges from his room, holding out Dribble for the party to see. Mrs. Yarby screams. Mr. Yarby yells, "Hatcher! Get that thing out of here!" Didn't he know Peter's dad's name was Warren?

Then Fudge re-enters toting Peter's older copy of the picture dictionary, and things become  even more awkward. Peter is embarrassed, and furious at his little brother. Fudge isn't finished tormenting the crowd, though. His last hurrah involves a gorilla mask and a pale faced Mrs. Yarby.

Later, when Fudge is asked by their father to help in filming a commercial for a Toddle-Bike, Peter must learn to step up as an older brother, and comes to find he's not as invisible as he had always thought.

The first in Judy Blume's Fudge series, Tales of a Fourth Grade Nothing serves as an addictive introduction to chapter books for young readers. All kids will relate to Peter Hatcher and the misery of annoying younger children. Laced with references to popular culture and plenty of family humor, Fudge lives on with the rest of Blume's offerings as one of the most popular series for beginning independent readers.