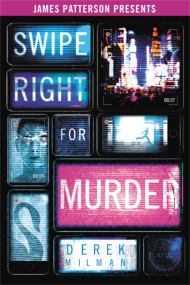 Aiden, for the most part, is just your average 17-year old high school student. He goes to a private school, is openly gay, and has two very close friends who love him for who he is. However, a surprising chain of events leads him into the center of an FBI investigation of one of the most dangerous terrorist groups in history.

It all starts in a fancy hotel in New York City where Aiden is spending the night. He downloads a hook-up app called “Dirty Paws” and connects with a cute fellow named Benoît who he spends the night with. But when Aiden wakes up, Benoît lies dead next to him with a bullet in his skin and blood pouring from his body. Aiden is terrified, and jumps when Benoît’s phone rings.

“We have a visual of you.” Whoever is speaking is closely watching Aiden, and thinks he’s someone else. Aiden has unknowingly stumbled right in the middle of something incredibly dangerous. The man on the phone talks to Aiden about an item that was supposed to be delivered, and proceeds to threaten Aiden and his family. Aiden is scared for his loved ones, and with Benoît dead in the room with him, is now afraid of being accused of murder. He’s too afraid to call the cops, so he takes ten thousand dollars from Benoît’s suitcase, and makes a run for it. With both the mysterious man on the phone and the cops chasing him, Aiden beings a long, thrilling journey to figure out exactly what is happening and to clear his name.

This book is absolutely bonkers. You will not be able to put it down for even a second as the events progressively get weirder and wilder. There are police stand-offs, terrorists in bunny masks, electrifying swimming pools, and deadly roller coaster rides.

One of the book’s best aspects, though, is Aiden coming into himself and learning more about who he really is. As you make your way through the book, you learn about a lot of tragic moments in Aiden’s life and how he has dealt with death, suicide, and coming to terms with his sexuality.

The book has a central theme of LGBT rights and the struggles members of the community face as they come of age. A lot of the moments in this story are really sad, but it ultimately does a good job of painting a setup for a hopeful future and encourages teenagers to educate themselves about their history and to fight for what they believe in. There aren’t a lot of quality LGBT-centered thrillers, so readers will be glad this one is available to them.