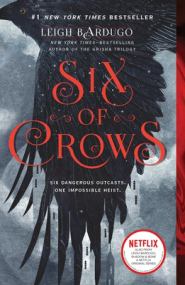 Most of my favorite books come from authors I know and love. The style of their writing, the characters I’ve grown accustomed to, the worlds I’m already familiar with, and so on. But once and a while a book comes around with such hype behind it that you have to pick it up, dive right in completely in the dark and hope for your sake that the pages turn quickly. Leigh Bardugo’s “Six of Crows” is a blockbuster of a read! The characters she’s created, the world building, the ever engaging plot simply leave the readers imagination in hyperdrive and only craving more! The book is set in Bardugo’s alternate “Grisha” universe the same as her other novels, this time in an alternate Netherlands as opposed to Russia. Ketterdam, besides being filled with slums and overrun with drug lords is known as an international trading hub where goods from the farthest corners of the world can be purchased. Everything has a price and because of that nothing is off limits if you want it bad enough. Our antihero Kaz Brekker is something of a prodigy, a criminal prodigy. Sharpening his skills on the streets as a master manipulator, thief and all around con man Kazz is offered the haul of a life time if he is able to complete a seemingly impossible heist. Tasked with breaking into a fortress that has never once been penetrated to free a prisoner won’t be something he is able to do own his own, so he assembles a crew, “The Dregs”. Comprised of, in Bardugo’s own words of “a gambler, a convict, a wayward son, a lost Grisha, a Suli girl who had become a killer, a boy from the Barrel who had become something worse”. With his crew intact its time to formulate a plan, put it in motion and execute the task at hand all while staying alive and did I mention, saving the world!?

“This has all the right elements to keep readers enthralled: a cunning leader with a plan for every occasion, nigh-impossible odds, an entertainingly combative team of skilled misfits, a twisty plot, and a nerve-wracking cliffhanger.” ―Publishers Weekly, starred review

“Set in a world that will be familiar to fans of the author, this book can be fully enjoyed without having read any previous title. . . . This is an easy choice for teens who enjoyed The Grisha Trilogy, Diviners, or any of the Shadowhunter books.” ―VOYA, starred review