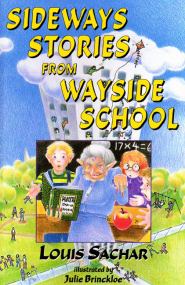 There are strange things afoot on the thirtieth story of Wayside School. The classroom’s first teacher, the wicked Mrs. Gorf, turned all her children into apples, but had to be replaced when they reversed her spell, turned her into an apple, and she accidentally was eaten by Louis, the schoolyard teacher. Whoops. The twenty-seven wacky kids are now in the hands of a bewildered nice, young teacher, Mrs. Jewls, and each chapter is devoted to their quirks, one classmate at a time. Sharie naps during every period, and one day she falls straight out the window. Louis the schoolyard teacher (okay, the author) carries her back up the thirty stories—and she’s still dead asleep. Deedee, taught to problem solve, approaches the problem of getting the last picks of recess equipment with the solution of being kicked out of class early (by dressing up as a dead rat). And Sammy…well, the class removes Sammy’s many raincoats one smelly day to reveal that who they thought was the new kid is actually a dead rodent in disguise.

Mrs. Jewls matches them at every turn—by writing their names on the chalkboard under DISCIPLINE, for as strange reasons as greeting her good morning, or dressing up like dead rats. Once their names are written, underlined, and circled, the kids are sent home early on the kindergarten bus. They fill it up fast.

Sachar’s nonsensical humor and snappy dialogue show up in every line in Wayside. If your kids beg for more, segue into Wayside School is Falling Down and Sideways Arithmetic From Wayside School—they’ll be doing math problem after math problem from the book before they know what hit ‘em.