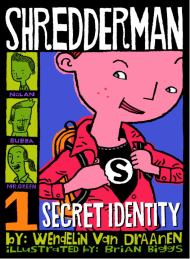 Now that he is in fifth grade, Nolan Byrd—called Byrd-the-Nerd by his arch enemy, his lying, cheating, stealing, bullying classmate, Bubba— would love to do something about Bubba. Problem: Nolan is half Bubba's size, and, as he says, "I don't exactly want to die in elementary school." Nolan's teacher, Mr. Green, has a ponytail, plays guitar, and wears jeans and sandals to school. (Bubba calls him the Happy Hippie.) Every month, Mr. Green gives the kids a creative project to do. Nolan loves math and computers. He hates creative projects. This month's project, though, is right up Nolan's alley. They have to design their own newspaper page and write about an injustice, and they can use their computers. Watching Bubba steal Miriam Whipple's assignment page, Nolen gets an idea. He'll do a report on injustice, all right. Assuming a cybersuperhero secret identify, Nolan sets up a website, Shredderman.com, and posts photos of Bubba in action, doing wrong.

A fast and funny story of the triumph of the nerds, this is the first of a four-book series with real kid appeal. Find activities and fun at the Shredderman website