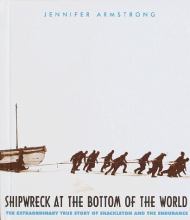 Filled with intriguing details and written with dramatic intensity, this riveting account of the ill-fated Imperial Trans-Antarctic Expedition reads like a gripping adventure novel. In 1914, Sir Ernest Shackleton attempted to be the first explorer to cross Antarctica by foot "from sea to sea." On the eve of World War I, he set out with a crew of scientists and sailors on a specially designed ship, Endurance, but he and his team never reached their objective. The ship became entrapped in ice, and the men were forced to abandon their mission and try to survive in the brutally harsh Antarctic wasteland for 19 months. The harrowing circumstances of their ordeal include a treacherous hike across miles of frozen wasteland, an 800-mile open-boat journey through savage seas, and a perilous trek across the uncharted mountain ranges of South Georgia Island. Thanks to Shackleton's courageous leadership and astounding resourcefulness, the bravery of his crew, and a lot of luck, everyone survived.

Jennifer Armstrong brings all of their experiences vividly to life, frequently using quotes from members of the expedition. The story is illustrated with black-and-white photographs taken mostly on glass plates by expedition photographer Frank Hurley. The exceptional quality of the photographs is all the more remarkable given the primitive equipment Hurley had to work with and the extreme conditions the photographs endured.

Shipwreck at the Bottom of the World is an unforgettable adventure story of true heroism and the triumph of the human spirit that will capture the attention and imagination of readers from 10 to 14.