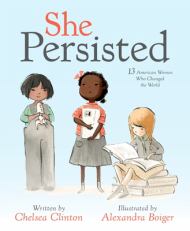 The perfect book to inspire a new generation of persistent women, She Persisted by Chelsea Clinton is a beautifully illustrated children’s book that young readers can learn a lot from.  Clinton explains that being a girl can be hard, and there will be times when someone will tell a girl that she cannot do something because she is a girl.  She goes on to tell her young readers that girls can do anything and gives examples of thirteen influential American women who were told they could not do something, but they did not take no for an answer ― they persisted!

Of the thirteen women mentioned in She Persisted, some names will ring a bell, like Harriet Tubman, Hellen Keller, Oprah Winfrey, and Sonia Sotomayor.  Clinton explains the incredible feats these women accomplished after being told they couldn’t simply because of their gender. Other names may not be as familiar, and you can learn along with your child. For instance, Clinton includes the story of Claudette Colvin.  Claudette was only fifteen years old when she refused to give up her seat on the school bus to a white woman and inspired Rosa Parks to do the same.  Florence Griffith Joyner, who to this day hold the records in the 100-meter and 200-meter sprints from when she won gold at the 1988 Summer Olympics ― this makes her the fastest woman ever.  Virginia Apgar dreamed of being a doctor well before it was considered normal for women to be doctors.  Even after qualifying to be a doctor the head surgeon, who was a man, told her that she shouldn’t become a doctor because of her gender.  But Virginia persisted and went onto create the Apgar score to treat a newborn baby’s heath ― hospitals around the world still use the Apgar score today.  Like Virginia, Nellie Bly also had a man tell her she couldn’t’ do the job she wanted to do, he told her that working women were a “monstrosity,” so she proved him wrong and became a reporter.  She went undercover as a sweatshop worker and a patient in a mental hospital and exposed the institutions and their terrible conditions.

A wonderful story to read with your budding feminist child, well suited for children ages four to eight to read on their own. She Persisted is bound to inspire a new generation of strong and empowered activists!