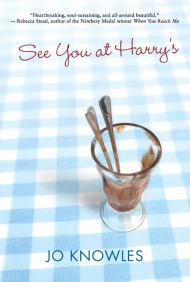 At the center of See You at Harry’s is Fern, who is about to embark on her first year of middle school.   On the first pages of the novel, Fern reflects on a childhood memory of her mother reading to her from Charlotte’s Web. Once finished, her mother asks:

“Do you know why I named you Fern?”
I nodded, looking at the drawing of the girl on the cover of the book.
“Why?” she asked.
“Because Fern is one of your favorite characters?”
“And why is that?”
I shrugged.
“Because Fern cares,” she said. “From the moment you were born, I could tell you had a special soul. I knew you’d be a good friend. A hero.”

Indeed, her mother was right.  At age twelve, Fern is compassionate and sensitive, still figuring out her place in a day-to-day world that keeps on changing.

Set against the backdrop of the family’s restaurant, the novel follows several threads and family dynamics. Fern’s father is absorbed in rebranding the restaurant (Harry’s), which sweeps the entire family into an embarrassing marketing effort. To cope, Fern’s mother grows distant and often retreats from the family in order to meditate. Her older sister Sara recently finished high school and now lives at home while working at the restaurant, and her high-school-aged brother Holden is exploring his sexual orientation and dating. Finally, there is Fern’s rambunctious baby brother Charlie, who becomes the unwitting and adorable face of the family restaurant. Each fills Fern’s time between school, homework, and helping at the restaurant with moments of family drama that range from genuine laughter to barely contained annoyance and everything in between.

When sudden tragedy strikes, Fern must find a way to deal with guilt, regret, and a wracking grief that will forever change her family. It’s this emotional journey and the strength of her character that truly earns her the title of hero.

Parents should know that Fern – just like many her age – deals with complex issues in the course of the novel: discrimination and bigotry, bullying, the death of a family member, and grief. But there is also solidarity, friendship and love in a family that is far from perfect. Through Fern’s first-person narration, Jo Knowles deftly and beautifully gives voice to unspeakable grief and heartache in a way that is convincing, affecting, and true.

Not all readers may be ready for this book, but those who want to be immersed in another’s feelings and struggles will find that though See You at Harry’s has a heavy heart, it is well worth its weight in emotional truth: the struggle of guilt and grief, the bonds of family, the power of being a friend, and the hope found in moving forward one day at a time.