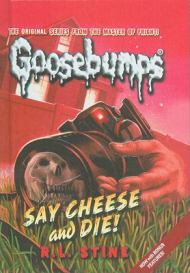 Shari, Michael, Bird and Greg have nothing to do in the boring, remote town of Pitts Landing, and decide to explore the creepy ramshackle Coffman house down their street. After pillaging the basement, they find old treasures: boas, old coats, and even a working automatic camera. Greg takes a photo of Michael posing on the stairs, and five seconds later, Michael falls to the concrete ground. He takes a photo of his father's new Taurus station wagon, and the picture develops to reveal the same car, completely wrecked. Soon after, his father is seriously injured in a car accident, and the car itself becomes identical to the foreshadowing picture. When Shari demands Greg bring the "weird" camera to her birthday party, their photographic exploits become downright lethal.

Fox created a popular TV show based on the Goosebumps series. Watch a clip from the Say Cheese and Die episode (featuring a young Ryan Gosling), here: http://www.youtube.com/watch?v=_129OzbETvo.

Stine' s Goosebumps series have made kids laugh and quiver in fear since 1992. Reigning prominent to his books' scenery are abandoned houses, ghosts, mummies, evil masks that transform its wearer… Stine has mastered the scary pageturner for kids. Other standalone favorites in the series include Welcome to Camp Nightmare, The Haunted Mask, and Night of the Living Dummy. The covers are terrifying enough on their own; they include skeletons laughing at their ill fate, or crazed faces of evil creatures, all topped with the dripping, slimy Goosebumps logo.

First Lady Laura Bush interviewed R.L. Stine on NBC's The Today Show, and she asked why he "went scary." He replied that it took him twenty-five years to find something that encouraged boys to read. It turned out to be his scary surprises; he started writing a cliffhanger at the end of each and every chapter. Before the boy readers realize it, they've read an entire book. Just make sure the kids aren't reading these books with a flashlight under the covers, for their own sake.