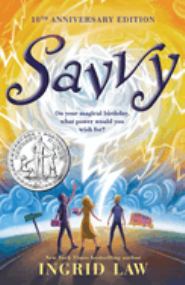 "When my brother Fish turned thirteen, we moved to the deepest part of inland, because of the hurricane and, of course, the fact that he'd caused it." With that first sentence washing you over like a storm, meet Mibs Beaumont, from a most unordinary family, each member having an exceptional talent or savvy. Rocket, now seventeen, is electric through and through. Mamma's savvy is that she does everything perfectly. (Female savvies tend to be less flamboyant, though certainly not always. Mibs mentions second cousin Olive, who can melt ice with a single red-hot stare.) And now Mibs is on the eve of her thirteenth birthday, the day her savvy will kick in, and she's impatient to know how it will change her life. The family lives off the highway in a remote place between Nebraska and Kansas. Except for school and church, Mibs doesn't get to be around other kids much, which is okay since they think she's weird anyway. She'll be home schooled from now on, since it's not really safe to be around outsiders until you learn to scumble your savvy. Then comes the phone call with bad news. Poppa's been in a car wreck and he's unconscious in a hospital in Salina, 40 miles away. Mibs thinks her savvy might include the power to wake up Poppa. With Mamma on her way to his bedside, in comes the pastor's bossy wife, Miss Rosemary, to look out for the Beaumont kids. She's the one who insists on organizing a birthday party for Mibs at church, where there is bound to be trouble. In an unforgettable road trip, Mibs and her brothers and Miss Rosemary's two kids stow away on the pink Heartland Bible Supply Company bus that they assume is headed for Salina.

What a fresh and original voice from first time author, Ingrid Law, with an enticing dollop of magical realism and adventure. What your under-thirteens need to do is figure out what their savvies will be and what they'll do with them. There’s a pretty swell website where you can hear the mesmerizing first chapter read aloud, plus find related games, wallpaper, and other downloads at: www.walden.com/walden/properties/savvy

Riordan, Rick. The Lightning Thief. Miramax/Hyperion, 2005. (And other titles in the Percy Jackson & the Olympians series.)