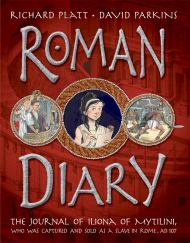 Iliona is starting a new diary on the advent of her family's journey from their home on the Greek island of Mytilini, and across the Aegean Sea to Alexandria, Egypt. It is Year 3 of the 221st Olympiad (or what we would call AD 107), and while she is excited to be setting off on an adventure with her parents and younger brother, Apollo, disaster strikes quickly. Pirates take over the ship, and in the ensuing battle, her mother drowns and her father is run through with a pirate's sword. The two children are taken as slaves, which the pirates call "self-loading cargo," and begin the long journey to Rome, the "very center of the world." At the slave auction, the children's feet are dusted with chalk to show that they are newly taken slaves, and are bought by the overseer of Gaius Martius, a senator. Apollo is taken away to work in the fields, but Iliona's job is to care for the master's youngest child, Lydia, and to teach Greek to his sons. She is able to attend school, go to the baths, and participate in the family's day-to-day life.

What makes Iliona's journal so compelling are the copious and meticulously detailed watercolor and ink illustrations on every oversized page. Her ancient world leaps to life with humor and drama, immersing the reader in an intricate look at the Roman Empire. Readers will be astounded to learn about slavery in another time and place, which, Platt says " . . . kept ancient Rome running." Compare the treatment of Iliona and her brother, who does not fare as well at first, with stories of American slavery, such as Patricia Polacco's moving picture book, January's Sparrow. Meet other Roman children from the same era in The Thieves of Ostia>, the first in the Roman Mystery series by Caroline Lawrence.