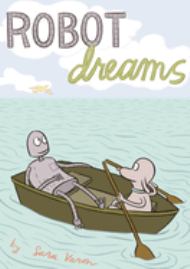 In a wordless graphic novel, a gray dog assembles, from a mail-order Tin Robot Kit, a new robot companion. Together, the dog and robot check books out at the library, cook popcorn, watch TV, and take a Greyhound bus to the beach where they cavort in the water and fall asleep on beach towels in the sun. When it's time to go home, though, the robot can't get up. (Tin robots really shouldn't go swimming, your readers will observe.) The dog, not knowing what to do, simply leaves him lying there, immobile, and goes home. Robot dreams that he never went in the water at all, but then he awakens to find himself alone on the beach and in the dark. That's the August chapter and it's a bit of a heartbreaker.'

In September, Dog, feeling guilty about what he's done, checks out a robot repair manual from the library and takes a cab back to the beach. He can see the robot still there, but the beach is closed for the season, with a barbed wire fence around it. Over the next months, the dog makes new friends while the robot continues to dream of being reunited with his friend again. The story, told within thick black-lined cartoon panels and soft pastel Mo Willems-like colors, is populated with expressive comic book-like animal characters and a clunky looking robot you'd surely want to have live at your house.

When you pick up this chunky little book, you'll assume it's for younger kids. There are no words. It looks like a cartoon. Ergo, it must be for pre-reading kindergarten kids who can "read" the pictures. Not so fast. There's a lot to ponder here. The dog seems like such a genial guy. You want to like him, but how could he walk off and leave his friend like that? Why didn't he try to get some help? You puzzle over the ways he deals with his own actions. Can they be justified? You see the robot lying immobile in the sand, covered with snow, and your heart breaks for him. How does the robot feel about the dog over the course of the year? You'll find no reconciliation of dog and robot here (though you'll be relieved when the robot is rescued and makes a new friend). Some friendships are like that, though I felt angry at the dog for giving up on his companion and for having so little sense of responsibility. Readers can talk about the personalities of the two principal characters and how they are like or unlike people they know. Friendships can be complicated, and life doesn't always go the way you want it to.