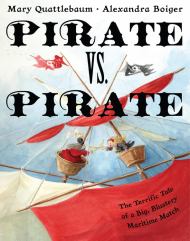 Two pirate captains set sail, each one determined to prove that s/he is the best in the world. They meet on the high seas, and the competition begins. Each demands, and refuses, to give way to the other using the most colorful pirate lingo. Then the insults begin to fly: "Grog swiller." "Landlubber." "Bilge rat." "Sea skunk." But when Mean Mo calls Bad Bart "Gentleman," and he counters: "Lady," there is no backing down from those fightin' words. Each wants to blow up the other's ship but their crews won't have it.

Instead, woman to man, the epic contests begin. They swim for three days and wear out twenty sharks, but their race is a tie. Aarrrr! In succession they try mast climbin', arm wrestlin', hardtack eatin', and cannonball hurlin'. Watercolor illustrations capture all the energy of the antics with the visuals switching from expansive, full-spread pictures to smaller stop-action vignettes. The text, appropriately set in CC Treasure Trove type, sweeps across the page and varies in size to reflect the emotion. Mean Mo and Bad Bart even count their treasures only to find they have an exact match. That is when the realization dawns: maybe they are a match! Bad Bart appraises Mean Mo: "Why, that lass could outswim sharks. She could heave cannonballs as big as his fist." Mean Mo considers Bad Bart: "Why, that man could climb masts and gobble hardtack like no one she'd ever seen (except herself)." Of course, their courtin' takes on epic proportions, too, and the twist will leave readers laughing out loud.

Riding the wave of pop-culture, these pirate characters are wholly original and irresistible. If children need to be reminded that girls can do anything boys can, they will find a worthy example here. They will also understand that someone who offers a good challenge is not necessarily a foe. The story is a fine addition to the canon of tall-tales and the playful text is best read aloud in pirate dialect.