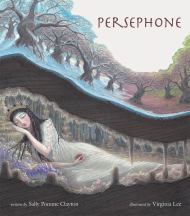 Raven-haired Persephone is gathering spring flowers in the fields when the ground opens up, and Hades, King of the Underworld, ascends in his chariot and abducts her. "You will be Queen and light up my kingdom," he declares imperiously. Into the Underworld they race, while Persephone's friends race to tell Demeter, Goddess of the Earth, that her daughter has disappeared. Learning of Persephone's whereabouts, the goddess curses cruel Earth and refuses to allow anything to grow. After a year of misery, Father Zeus, God of the Sky sees that Earth is dying and sends Hermes to Hades to bring the girl back to her mother. As long as she has eaten nothing, she will be free to return to her mother. Unfortunately, Hades entices the girl with a golden bowl of ruby colored pomegranate seeds. When she eats three of the jewel-like seeds, her fate is sealed. She will need to return to the underworld for three months each year, one year for each seed. Which, of course, is why we have winter each year, when Persephone goes back to Hades. Dark, dramatic, and mysterious mixed-media illustrations suit the somber mood of the Greek myth and pourquoi tale.