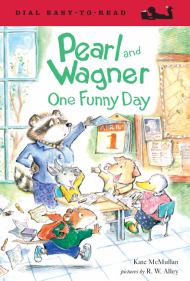 "Phooey!" says little brown mouse, Wagner, "This is not my day." Usually he has a good sense of humor, but it's April 1 and everyone keeps fooling him. When he gets to school, his best friend Pearl, a gray rabbit, tells him their teacher, Ms. Star, is roller-skating around the classroom. "She is?" exclaims the gullible mouse. "April fools!" Pearl crows. In class with his raccoon teacher, in the library with Mr. Fox, and even in the lunchroom, everyone keeps tricking him. "I love April Fools' Day," says Pearl. "Not me," says Wagner morosely.

In three easy-to-read chapters, filled with expressive watercolor and fine line pen and inks, Wagner's day goes downhill. He's terrible at dancing in gym in chapter two, and in chapter three, he gets a tummy ache during silent reading time and heads for the nurse. When he comes back to the classroom, he is covered in green spots. "Bug pox," he tells everyone. Is it catching? "Only if I sneeze," Wagner says, as he starts sneezing. "Cover your mouth!" cries Pearl. As his friends watch nervously, hiding behind their books, Wagner opens his mouth wide and says, "Ah . . ah . . . ah . . . April fools!" And he laughs himself silly.

This 2010 Theodor Seuss Geisel Honor book, the third in a series about Pearl and Wagner, is everything an easy reader should be. In spite of the constraints of easy vocabulary and short sentences, the story sparkles with real humor, believable situations, and a character with whom readers will identify. Talk about what it means to have the last laugh. After reading the blurb about the author on the back flap, ask your kids to recall their best April Fools' Day tricks ever.