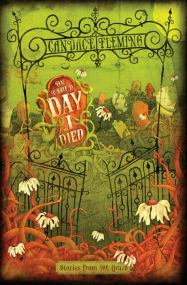 On the Day I Died

Mike picks up a hitchhiker and is lured to a graveyard for those who died too young. As the specters rise, he hears hair-raising stories about their untimely deaths. The question is: will he live to tell the tales?

Set outside of Chicago, Mike is driving home one night long past his curfew when he sees a girl his age who appears to need help at the side of the road. The strange encounter leads him right to the infamous White Cemetery where the dead crowd the living boy, each clamoring to tell him how they died. But is that their only intent? Will they let him go afterward or must he remain with them forever? With that threat hanging, each ghost spins a harrowing, haunting story -- because readers can be sure that none died of natural causes!

Scott set out to prove that there were no ghosts at the old State Asylum for the Insane but, too late, discovered they do exist; David died when his Insta-Pets grew out of control like a bad experiment in a sci-fi movie; Gina’s death came at the hands of an angelic-looking arsonist. Each voice is entirely original and the time period for each tale is convincingly established with some mining Chicago’s most famous moments in history. For example, how did Tracy think she could outwit her crazy Aunt Viola, the moll who double-crossed Capone and stuffed his body into her attic? In another, sibling rivalry and jealousy, mixed with supernatural forces, lead to the death of two sisters during the World’s Fair.

There is something for every reader in this shivery collection whether it is an examination of pure evil, ancient curses, alien encounters, or psychological drama. What is sure is that none of the stories will be forgotten -- which is exactly what the ghosts hope to accomplish. Indeed, kids will find themselves scaring friends with the tales on appropriately dark and moonless nights.