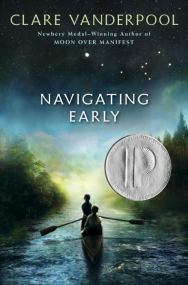 Navigating Early is a survival story in every sense, physically and emotionally.

Jack is adrift after his mother dies and his dad, just back from WWII, enrolls him in a boarding school in Maine. When he befriends Early Auden, a strange loner who rarely attends classes, Jack knows he'll be labeled a misfit. But Early knows about loss, too. He recently lost his father. Jack also discovers that Early’s brother Fisher, a soldier serving in France, is presumed dead.

Fisher,brilliant and athletic, had been something of a school hero and the other boys continue to idolize him. But they can’t reconcile that someone as odd as Early is related to Fisher. They prefer to ignore Early. His gifts are ones they don’t understand, especially the one where he sees a story – an allegorical journey – unfold in the digits of Pi.Jack doesn’t get it either, but when Early suggests a quest on the Appalachian Trail to find Pi – or is it Fisher? – Jack is not sure which – he goes.

Readers will appreciate how reality and story begin to intertwine. The obstacles Jack and Early must overcome and the villains and lost souls they meet strangely parallel Pi’s story; and Pi’s experiences guide and inform them. Like Pi, Early and Jack begin their journey in a boat, entering the woods via river where they are overtaken by – pirates! They escape and champion a damsel in distress. They survive a bear attack and bring peace to an ancient woman who has spent a lifetime waiting for news of her son. The setting and characters are so vividly wrought, children will feel they have traveled alongside Jack and Early. Although mystified by the coincidences, Jack finally feels he’s beginning to get his bearings. He’s learning to forgive himself and come to terms with his grief. That’s when Early goes off course. With their roles reversed, Jack realizes he must now navigate and bring them home safely.

At different points in their lives when they are facing challenges and doubts, children will readily recall this image-rich book. It may well help them get their bearings.