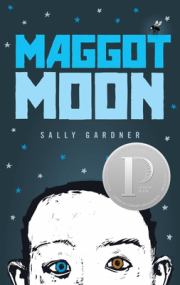 Standish Treadwell, the hero of Sally Gardner’s challenging, heartbreaking, unforgettable novel, is dyslexic, but his condition isn’t understood in the grim community where he lives, an alternate 1950s England in which history has been rewritten: This is England imagined as if the Nazis had won World War II. The “Motherland” is a violent, brutal place where people (including Standish’s parents) routinely disappear without explanation. Those left behind are hungry; torture is the norm. Only those collaborating with the regime enjoy any meaningful standard of living.

Standish narrates the story in 100 short, fast-paced chapters, illustrated with flip art of rats, flies, and maggots that represent the oppressive forces in control. Standish’s trouble with reading has led teachers to underestimate his intelligence, and the school bullies revile him as an imbecile.

This grim existence brightens when Hector and his parents, a scientist and a doctor, move into the house adjacent to where Standish lives with his grandfather. Hector not only becomes a much needed friend and Standish’s protector at school, he doesn’t let Standish’s disability define him. “I believe the best thing we have is our imagination,” he tells Standish, “and you have that in bucketloads."

This is much more than a story about friendship or overcoming a handicap. The regime is intent on being first to land on the moon, seemingly at whatever cost to its citizens. On his own, Standish figures out one of the government’s big secrets,and when the authorities arrest Hector and his family, Standish concocts a brave, personally-risky, plan that he believes will both locate his friend and sabotage the government’s moon project.

Parts of the story are difficult to read – a classmate is beaten to death by a teacher while onlookers in the schoolyard do nothing. Later, Standish wonders why mankind is so cruel. No answer is supplied.

It’s the kind of question you want teenagers to be asking themselves. Maggot Moon is full of important questions about the nature of humanity and what individuals can do to thwart pure evil. And though it ends on a hopeful note, it’s powerfully sad.

Note: There is some tough language in the book, appropriate to the characters and plot.We recommend this for older teen readers.