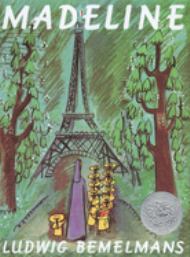 Pen and ink renditions of French, stickmen-drawn girls give way to lush watercolor drawings of 1930's Parisian streets, allowing this classic picture book to withstand the test of time. The girls' teacher Ms. Clavel leads Madeline and her peers in two straight lines through the famous streets of Paris. The two straight lines of girls walk past the Eiffel Tower, the Opera, the Louvre, turning up their noses at the sights on the streets they disapprove of. Madeline is best at frightening Ms. Clavel by pulling stunts such as balancing on the tips of bridges. In fact, Madeline, though the shortest of the girls, stands tall as the most fearless. "To the tiger in the zoo, Madeline just said pooh-pooh." (The book is written in rhyming couplets). Late one night, back at the school, Ms. Clavel sits up in bed, knowing something isn't quite right.

Madeline is found by the nun crying in bed. The doctor is called, and soon calls his nurse, saying "It's an appendix!" Madeline is rushed to the hospital. The two straight lines of girls, one girl short, go to visit her, and upon seeing the toys and dollhouse her father has brought her, immediately all decide they want their appendixes out, too.