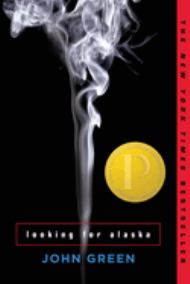 Looking for Alaska is John Green’s first in a long line of romantic young adult dramas. The story takes place at Culver Creek Preparatory High School, a boarding school in Alabama, and follows Miles Halter, later nicknamed “Pudge,” and the eccentric new friends he makes during his first year. One of the students in his friend group is Alaska, the eponymous, enigmatic, somewhat emotionally unavailable girl for whom Pudge quickly develops unrequited romantic feelings. Pudge and Alaska continue to deepen their friendship until one day Alaska is killed in a drunk driving accident. Left to wonder whether the accident was intentional or not, Pudge and his friends investigate clues from her last days, lean on one another for support, and ultimately, grapple with this incredible loss.

This book was originally published in 2005 and garnered much critical attention and controversy upon its release. While many lauded its treating of mental health and teen friendship, others castigated its use of explicit language and sexual content.

I first read this book as a high school senior— around the same age as the main characters— and loved the picture that Green paints of boarding school life. The pranks, drinking, and, of course, the “will they won’t they” love story between Alaska and Pudge, provided more than enough fodder for escapism during my sheltered teen years. While some of the elements of this story might not hold up, Green does a great job of attempting to challenge gendered romantic tropes in fiction— for instance, Alaska is definitely described by Pudge using the “manic pixie dream girl” stereotype, however one of the other characters directly confronts him about his problematic idealization of her.

Ultimately, this commercial coming-of-age novel is sure to attract a new generation of young adult readers, especially given the recent Hulu adaptation.