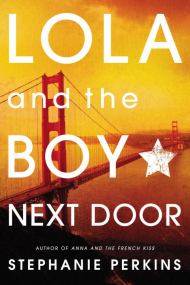 Lola and the Boy Next Door

Lola is an artistic teenage girl who loves making glittery, sparkly clothes. Her wardrobe consists of more costumes than “normal” clothes and it’s just the way she likes it. She has a cool rock star boyfriend, a great best friend, and two loving dads. Her parents don’t completely approve of her boyfriend, but other than that, things have been mostly going well. However, everything changes on one August day.

It’s been more than a year since twins Cricket and Calliope moved out of their house next door to Lola. Lola never got along with Calliope when they were growing up, and Cricket left her heartbroken before he left. But now the twins are back, and Lola has to face them.

Surprisingly, things aren’t all that awkward between Lola and Cricket. They begin spending more time together and redeveloping the friendship they had when they were kids. But Cricket has a big crush on Lola, and Lola, who has a boyfriend, doesn’t quite know what to feel.

This is a fun coming-of-age romance YA novel that is filled with wonderful characters and exciting plot elements. The characters are all quirky and unique and fans of contemporary books will fall in love with most of them immediately.

Fans of Stephanie Perkins’ previous novel, ANNA AND THE FRENCH KISS, will be happy to know that Anna and St. Clair have a prominent role in this book. One of the best parts of the book is that it acts as a continuation of Anna’s story while also telling a whole new story with brand new characters.

All of the characters in this novel are dynamic and it is extremely satisfying to watch them change and grow as you continue reading. It’s literally the classic tale of a girl falling in love with the nice, cute boy next door; however, it’s done in a way that doesn’t feel cliché. You’ll be rooting for Lola the whole way as she learns more about herself and exactly what she wants in life. This is a must-read for fans of contemporary YA and romance.