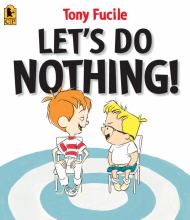 In one of my very favorite picture books of 2009, skinny red-haired Sal and his bespectacled, chubby blond pal, Frankie, are rehashing everything they've done today. So far they've: played every sport ever invented, painted "more pictures in a day than Van Gogh painted in a lifetime, baked enough cookies to feed a small country," played every board game, and read every comic book. Lying head to head, Sal wants to stop talking for ten seconds. "Ten seconds of nothing," Frankie agrees. "That's it!" Sal proclaims, standing next to the title page, his hands outstretched. Facing him is the title: Let's Do Nothing. But how does one do nothing? As the two confer-the story is written entirely in dialogue on the page-they decide to pretend they're statues. On the next page, they're depicted as stone statues in the park, until Frankie, a kid with a rich imagination, starts shooing pigeons from his head. Next, they pretend they're two redwoods in the forest. The image of the two as trees with eyes (and glasses) is priceless, especially when Frankie imagines Sal's Chihuahua taking a wee on Frankie's trunk. Next, Sal exhorts Frankie to see himself as the Empire State Building, and that's the most sublime picture of all, especially when King Kong climbs up and takes Frankie's specs. Is it possible to do nothing? Nope. The ink, colored pencil, and acrylic illustrations, outlined in black, are set against stark white pages when the two exuberant boys are talking, and on full bleed color pages when they're imagining. What a romp!