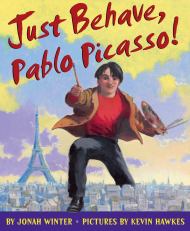 Readers should feel free to judge this book by its cover: The illustration of Picasso towering over Paris, stepping towards the viewer with a grin on his face makes clear that he is not going to heed the call to Just Behave, Pablo Picasso!

Open the book to view a tranquil, full-spread landscape painting, and with the turn of the page, Picasso leaps right through it! This representation brilliantly captures what Picasso did to the art world when he entered the scene. Covering his formative years in his twenties, the text highlights his travels and his experiments with style. For a period he is the starving artist; then, when he paints rose-colored paintings, he is celebrated and told to "Paint about two hundred more paintings JUST LIKE THAT!" The typography captures his growing fame, with his name repeated in ever-larger type.

Picasso, however, continues to seek new experiences and influences. An art show of African masks leads him in a new direction. Kevin Hawkes's illustrations depict a chorus of those who once chanted his name now deriding him: "Terrible!" In a dramatically theatrical illustration, one that forces readers to turn the book vertically, Picasso "expands himself to a height of one hundred feet" and defies his critics. He stays true to his creative calling and emerges next with a Cubist painting that, shown in an especially effective spread without text, renders his critics silent. An end note provides some details about Picasso's life and points out that Picasso continued to experiment with style. The last page includes a list of the paintings included in the book.

With Picasso as their inspiration, children will embrace their curiosity and understand that sometimes they may have to withstand dissenting voices.

EXTRAS:
To access a wealth of information about Picasso to share with children, visit the Metropolitan Museum of Art's (NYC) web site: http://www.metmuseum.org/toah/hd/pica/hd_pica.htm