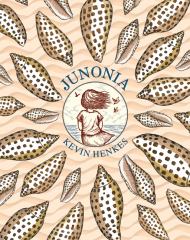 In a story that spans only seven days, Kevin Henkes perfectly captures the world of a nine (almost ten!) year old girl in this sweet and absolutely wonderful tale. Alice and her family travel from Wisconsin to Florida's Sanibel Island for their winter vacation each year. The family always stays in the same cottage, Scallop, and revisits the same friends and neighbors. Alice celebrates her birthday during their trip each year, a tradition that is very special to her. This year is particularly exciting; Alice is turning ten, and she is looking forward to all the maturity that double digits will bring. She is also convinced that this is the year she will find a rare Junonia shell to add to her extensive shell collection.

The Junonia shell comes from a type of deepwater sea snail, and is typically found washed up on shore only after severe storms. Alice has searched for a Junonia for years, with no luck. There is always the option of buying one in a local gift shop, but Alice has no interest in procuring the prized Junonia in anything other than the most authentic manner. That would be cheating. She just knows that this will be the year she finds one.

It turns out, however, that things don't go exactly as Alice had hoped. Her beloved aunt Kate, who joins the family at Scallop every year and dotes on Alice, is coming with her new boyfriend and his spoiled and whiney six-year-old daughter; they are even staying at another cottage on the beach. The three friends who always stayed nearby with their elderly grandparents aren't coming to Sanibel Island this year. And the nearby cottage of Helen, the eccentric and fun artist from New York City who always remembers Alice's birthday with presents, stands empty and dark.

With the guidance of her patient mother and father, Alice slowly comes to accept and cope with the disappointments that seem to come one on top of another during this turning-point week. Junonia is a gentle, quiet tale about growing up, and the realization that life sometimes lets you down. Kevin Henkes has created a character in Alice who deftly balances the line between girlhood and early adolescence. Her voice is authentic, and her worries, fears, and disappointments are spot-on.