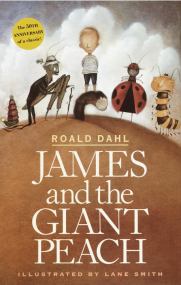 James and the Giant Peach

After his dear parents are eaten by an enormous and angry rhinoceros, escaped from the London Zoo, James Henry Trotter spends his next four years doing the bidding of the most odious and awful of relatives, Aunt Sponge and Aunt Spiker. His life seems hopeless until the day he encounters a strange old guy who gives him a sack of glowing green magical crystals made from crocodile tongues. James mixes the crystals with water and ten of his own hairs, as instructed, but trips and spills it on the ground under a gnarled peach tree. The crystals wriggle into the soil. Gone? Not exactly. The world's most gigantic peach soon grows on that tree. James, upon discovering a hole in the fruit, tunnels his way to the center where he meets and is soon befriended by an array of overgrown talking (and even singing) insects: Centipede, Mrs. Ladybird, Miss Spider, Old-Green-Grasshopper, the Glow-worm, and Earthworm. Off they roll in their peach, heading for the ocean.

While several illustrators have had a crack at this crackling fantasy—including Lane Smith (to mesh with the Disney movie of the book, still available as a DVD) and Quentin Blake, I've always loved the original art, dreamy and fantastical pen and ink and watercolors by Nancy Ekholm Burkert. Your kids will be happy with whatever version you find, losing themselves in a story of mean grownups, jovial insects, and a prodigious peach that ends up in the Big Apple, New York City. There's also a splendid recorded book version, narrated by English actor, Jeremy Irons (HarperChildrensAudio, 2007).