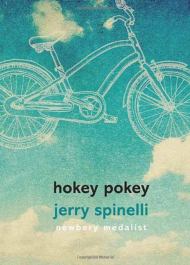 Wholly original, completely familiar, this is an allegorical tale where childhood is not just a stage, it is aplacecalled Hokey Pokey, totally separate from adults and adulthood. Grownups may be confused by the setting but that’s because they have grown up and forgotten. Young readers, on the other hand, intimately know the landscape -- the Great Plains -- where wild herds of bikes/horses thunder past and the thrill is to capture one and fly down Gorilla Hill: “Yeeeeeeeeeeeeeeeeeee-HAAAAAAAAAAAH!” Kids arrive just after they get out of diapers and stay as they grow from Newbie, Snotsipper, Gappergum, Sillynilly, Longspitter, Groundhog Chaser and finally, Big Kid. All day long they football, war, jumprope, runamuck and chuckleduck. Readers will delight at the invented titles and catchphrases that so perfectly describe their childhood world!

Jack is one of the Big Kids, looked up to by all. But when he wakes up one morning, things feel different -- and not just because agirl has stolen his bike. He Tarzan-calls his best amigos to help him recover it. As they traverse the terrain, searching, we learn more about Hokey Pokey with its Socks mountain (pew!), Cartoons, Doll Farm, Snuggle Stop, and The Kid, a statue pointing…where? And what is the Forbidden Hut? Jack is starting to question things he accepted in the past. He is feeling a strange tug telling him, “It’s time.” After a while, Jack discovers he’s not even angry with Jubilee, the girl and longtime rival who took his bike. He isn’t sure where he’s going, but knows he has to leave Hokey Pokey.

Tweens will readily identify with the boy-girl rivalry as well as Jack’s awakening: maybe Jubilee isn’t so bad. Maybe, with that cute yellow ribbon in her hair, she’s going to be a good friend. Still feeling a tender longing for their own recently lost childhoods, they understand the painful conflicts of growing up but know that time, like a train, will not be stopped. For them, Spinelli offers a story to help them celebrate and cope with all that is past and all that is to come.