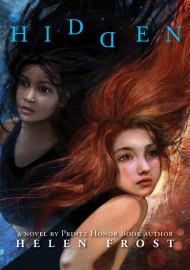 A story that could have been taken from the headlines grabs readers from the first lines and never lets them go.  Wren was just eight years old when she was unknowingly abducted by the man who stole her mother’s car. She had been waiting in the backseat while her mother ran inside a convenience store to pay for gas, and her first instinct was to hide. She stayed hidden, even after the man pulled the car into his own garage and returned to his own family, which included another eight year old girl, Darra. When the news reports mentioned the missing girl, Darra looked for her in the car and around the garage but couldn’t find her. Wren had hidden well. Darra, certain that she was out there, began to leave her food, an act that helped Wren survive and eventually escape unharmed. The information she is able to give the police led to the arrest of Darra’s father.

Fast forward six years and the two girls’ paths cross again when they are attending the same summer camp.  Now fourteen, Wren has been able to put the traumatic event behind her, but she immediately recognizes Darra’s voice, although the two had never met. And, of course, Darra remembers Wren from the news reports, and she blames her for her father’s imprisonment and her family’s hard times. But both girls keep their thoughts and feelings hidden. They don’t even acknowledge that they have recognized each other. Only the readers of this book get the full story, since we get both girls’ stories in the alternating perspectives.

Helen Frost writes each chapter as a short poem, a form that makes the story easy to read, even for kids who struggle with reading. And for those who are ready for a slightly bigger challenge, they will find they can read the words that stand out at the ends of the lines in Darra’s poems to get an even more hidden story – Darra’s view of the event from six years earlier when she first learned her father had stolen a car.

Tips for Parents:
Many contemporary novels for children and teens these days are written in poetry. If your child doesn’t like poetry, don’t assume this will be a turn-off or that it will make the book difficult for your child. Most novels in verse are actually easier to read because the lines are shorter and there is more white space on each page, giving the eyes plenty of space to rest. Helen Frost is one of the best authors writing in this form, and she always puts a lot of action into her stories. The dual perspective she offers in this book allows parents opportunities to talk to their children about how two people can experience the same event differently, a key to helping children develop sensitivity to the feelings of others.