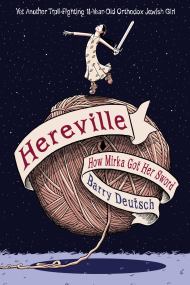 Mirka wants to slay dragons not that she has ever seen one in her Orthodox Jewish community. But in this exuberant graphic novel nothing is as you would expect. Take her step-mother Frumka. Sharp, intelligent, and ultimately very clued into her stepdaughter, she’s not the nasty sort so often presented in traditional fairy tales. And this is a fairy tale complete with a witch, a troll, magic, and some very exciting moments indeed.

One day, after a nasty encounter with bullies on her way to school, Mirka comes across a very strange house with a woman floating in the garden. Returning to show several of her siblings (she’s got eight) she grabs a single grape from the garden, and then is chased by one enormously scary pig. Since her religion forbids the eating of pork this is the first pig Mirka has ever seen, but it isn’t the last.  For the pig won’t leave her alone. Day after day it finds her, destroys her homework, and otherwise makes life seriously miserable for her. Turns out it belongs to the inhabitant of the house, a witch, who is furious that Mirka took her fruit. More encounters with bullies, a change of heart on the part of the witch, some supernatural beings, and a remarkable use of knitting skills all come together in this highly appealing adventure.

Barry Deutsch’s story began as a web comic and his art is as energetic and appealing as Mirka herself. Her family and the setting are delightful too  -- Deutsch beautifully mixes interludes of Mirka’s Orthodox Jewish life with her magical experiences. From the book’s subtitle you know that Mirka gets her sword -- but learning how she did is part of the fun of reading this delightful book. As the book ends on a cliffhanger, readers will be eagerly awaiting Hereville’s next installment.