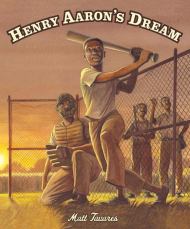 Every kid has a wish – a dream for his or her own future.  Henry Aaron was no exception.  He wanted to play baseball – professional baseball -- when he grew up.  But baseball stadiums in his hometown of Mobile, Alabama in the l940s were for "WHITES ONLY."  After high school, Aaron played in the Negro Leagues and then, when Jackie Robinson broke the color barrier in major-league baseball in 1947, Aaron began to dream again.

It took perseverance, enormous talent, and courage for Henry Aaron to not only hold onto his vision, but also to make it a reality.  Matt Tavares explores all three of these qualities in a handsome picture-book biography that is part history, part inspiration, part sports story all mixed together with a touch of folk-lore hero.

Kids need their dreams – and they need heroes to be their examples.  HENRY AARON'S DREAM offers both.