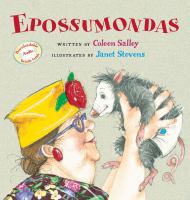 Storyteller and children's literature professor, Coleen Salley, who died in 2008, refashioned the noodlehead folktale, "Epaminondas," to reflect her New Orleans background, using a profusion of local animals including an alligator, a raccoon, a nutria, and an armadillo, that encounter a foolish opossum as he heads on home. In huge, affable watercolor and color-pencil illustrations, artist Janet Stevens has depicted Salley herself in the larger than life roles of both Auntie and Mama, who is clad in an ample, flowered tent dress, yellow pill box hat festooned with a red rose, and purple specs.

When Epossumondas, his Mama's sweet patootie, pays a visit his Auntie, she gives him a piece of rich gold cake, which he carries home all scrunched in his hands. One his way, he meets an alligator who observes, "Don't look much like cake to me." Back home, his Mama chides him, "Oh, Epossumondas, you don't have the sense you were born with! That's no way to carry cake! The way to carry cake is to put the cake on your head, put a hat on your head, and come along home." But the next day, Auntie gives him a stick of freshly-churned butter, which, logically, he puts under his hat, where it melts, dripping down his face. Each time, Epossumondas listens to his Mama, but still gets it all wrong, with hilarious results.