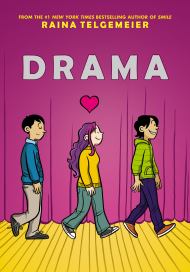 There’s plenty of drama in Callie’s life – onstage and off!

Callie is the set designer for her middle school play. She wants it to go off with a bang – literally – and is building a cannon that really “fires” for the show. If only she could add some spark to her love life. Callie’s first experiences with romance are fizzling – and confusing. First, her long-time crush Greg finally breaks up with Bonnie, kisses Callie, then makes up with Bonnie! Then, when Jesse, a new boy at school, asks her out, Callie can’t figure out if it’s as friends or a date. It’s not until Jesse jumps-in to fill the heroine’s role when the star drops out, that Callie begins to understand. Head spinning? Yes! And exactly what middle-schoolers are used to! But nothing keeps infectiously-enthusiastic Callie down for long, especially when she’s got set design and her stage crew to keep her distracted.

Raina Telgemeier proves to be a fine director in this graphic novel. The action is well-paced and the characters reveal themselves as they face challenges, forge friendships, and explore their emotions. She keeps visual interest high by varying perspective and alternating full- and half-page scenes with panels and close-ups. Her palette reflects the emotion and ends, appropriately with a rosy hue for, despite her confusion, Callie remains focused on the thing that excites her most – set design. In this way, the author shows Callie growing into a confident, independent young woman and readers feel sure that someday, when the time is right, Callie will find her sweetheart. In a nice touch, Callie’s family quietly takes a supporting role in the background: we see mom picking her up after rehearsal, attending the play with Callie's enthusiastic little brother, and taking pictures of Callie before her date.