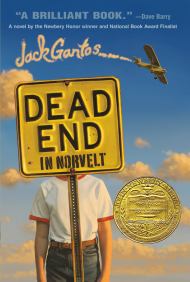 “Write what you know” is a maxim of the author’s trade so perhaps it was only a matter of time before Gantos, who has previously written the “Jack Henry” books based on his childhood diaries, would drop the pretense altogether and name a protagonist for perhaps the finest character he’s ever created: Jack Gantos.

“I used my name,” he writes in a preface to this wildly entertaining blend of biography and invention, “but changed all the others.”

No doubt readers will wonder what else is fact and what fiction in this story set in 1962 about a transformative summer in the life of 12-year-old Jackie Gantos. Like the author, the fictional Jackie grew up in Norvelt, Pennsylvania, a real town, built in the 1930s by out-of-work coal miners, and named for its most ardent supporter: First lady EleaNOR RooseVELT, the driving force behind a string of Depression-era towns that were planned and funded by the government. Could the real Jack Gantos have also been grounded for accidentally firing a rifle his Navy veteran father stripped from a dead Japanese soldier during World War II? Did the famous author spend much of his childhood trying to staunch epic nosebleeds? Did Girl Scout Thin Mints really once cost only twenty cents a box???

Either way, as summer starts Jackie is under the thumb of his do-gooder mother, who loans him out to take dictation for an arthritic neighbor, the commanding Miss Volker. One of the last survivors among Norvelt’s founding families, Miss Volker, a nurse, got her typewriter from Roosevelt herself in order to keep health records on residents. “Now it’s my closing tribute to Mrs. Roosevelt that I write their final health report – which, in this case, would be their obituary.” Jackie is kept alarmingly busy by Miss Volker’s output as the town’s little old ladies begin to die off in suspiciously rapid succession.

There’s trouble on other fronts, as well. Anxiety brings on the nose bleeds and Jackie’s snozz positively gushes for weeks on end as the Hell’s Angels go on an arson spree to avenge the death of a friend, while Jack’s best friend, Bunny, the undertaker’s daughter, makes his life miserable as payback for having been unavailable to play baseball. (With friends like this …) Jackie is called upon to exterminate the rodent population in Miss Volker’s basement as well as procure poison for the town busybody, Mr. Spizz.

By confronting death at every turn, however, Jackie learns to face his fears head on. And he comes to understand Miss Volker’s theories about the importance of knowing history. “The reason you remind yourself of the stupid stuff you’ve done in the past is so you don’t do it again,” he realizes. By the time you finish Jackie’s funny, intermittently gruesome tale, you get the strong sense he’s internalized that, and his days of being grounded are very nearly over.