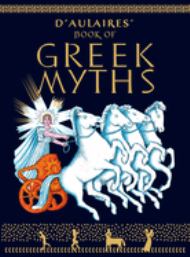 Peer into just one chapter of this oversized collection of Greek myth character stories and you'll see why it's been such a favorite classic for fifty years. Husband and wife team Edgar and Ingri d'Aulaire disintegrate the often stuffy format that's concealed some of the best stories ever told—Greek mythology—into light, breezy language. The book illustrates moving, laughing faces of nymphs, satyrs, centaurs, gods, goddesses and demigods within full pages of each story. As Persephone falls into the depths of Hades, so do flowers and a few ill-fated pigs. Gaea, Mother Earth, stretches her green mossy body over a full page, with smiling glassy eyes glittering upwards. She is later shown crying after birthing the Cyclopes and multi-headed beasts, who are locked away as ugly monsters by her own husband Uranus.

Each chapter tells the myths in full detail: love and war, murder and revenge, mortals being favored and hated by the gods and being transformed into cows for either. Best of all, they're just plain fun. The information-rich pages make the book ideal for both home and classroom.