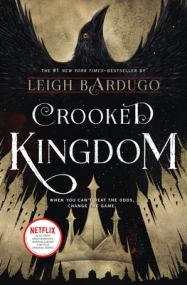 CROOKED KINGDOM is the much-anticipated sequel and finale to Leigh Bardugo’s bestselling SIX OF CROWS. Kaz Brekker and his team have just completed a heist so dangerous that no one, not even themselves, thought they would make it out alive. They were supposed to receive a monetary reward that would make them rich beyond their wildest dreams, but it turns out they were being duped all along. Now, instead of living the lives of luxury they imagined after their perilous mission, they are back again fighting for their lives.

If you thought the first book was intense, this one is going to blow you away. There is double the fighting, double the romance, and double the double-crossing. Kaz is truly one of the most interesting, violent, and morally-grey characters in any young adult book. However, he cares about those closest to him very much. You saw bits and pieces of this in SIX OF CROWS, but CROOKED KINGDOM takes it to a whole new level.

One of the best things about this series, on top of the great writing and epic world-building, is the character diversity. There is great physical disability representation, as well as representation of all different races, sexualities, class positions, and faiths. Each character’s background greatly affects the way they interact with each other and the world, which makes the book feel so detailed, intricate, and full.

If you’re reading this review after finishing SIX OF CROWS, you’re already probably on the edge of your seat waiting to read the sequel. That cliff-hanger was great and this book definitely doesn’t disappoint. This is one of the best fantasy duologies out there and once you finish reading, you’re going to want to do three things: tell everyone you know to read it immediately, act on a strong desire to look up fanfiction, and of course, read the series again!