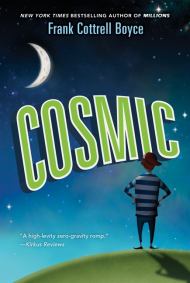 “I’m not exactly in the Lake District.”

Far from it.  I mean, really far from it. Outer-space-far-from-it, in fact. For as this enormously entertaining tale begins, almost-twelve-year-old Liam is using his cell phone to record an explanation to his father about how exactly he ended up on a rocket to the moon instead of on a more conventional school trip.

You see, while Liam may still be eleven, he is also tall. Really tall. Tall enough to ride any amusement park ride he wishes, tall enough to be sprouting facial hair, and tall enough to be repeatedly mistaken for an adult. Say on his first day at a new school where the head thinks he’s the new technology teacher. Or in a car dealership where he is encouraged to give a Porsche a spin. And most of all, when he wins a contest by pretending to be classmate Florida’s dad. A contest that sends the two of them and four other father-child pairs off to China and eventually puts Liam as the supposedly responsible adult with the other children on that rocket.

A screenwriter, Frank Cotrell Boyce knows how to set up scenes, create engaging dialog, and make a completely improbable situation believable. For young readers, Liam is a genuine kid even as he convinces the adults he encounters that he is much older. And it is in China, while competing with the other dads for the chance to be the one adult on the rocket with the children, that he has a few realizations about the nature of being grown-up and a father. As he did with his earlier and equally charming book Millions, Boyce beautifully melds scenes of laugh-out-loud hilarity with moments of gentle introspection.

A completely winning book, Cosmic is sure to enchant a wide audience of young readers.